The Silver Bow Creek Greenway Corridor stretches 26-miles along Silver Bow Creek between Butte and Warm Springs Ponds. It has long been recognized for its potential to provide citizens and regional visitors with passive recreational opportunities and access to historical and cultural resource sites—fulfilling a vision formed decades earlier. Visit the Trails & Outdoor Recreation page for a map to several Greenway trailheads, as well as surrounding trails and outdoor attractions. 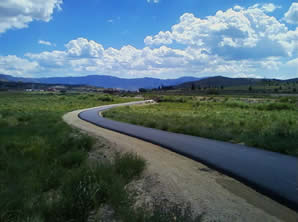 The Butte-Anaconda Historical Park System Master Plan (1985) and the Regional Historic Preservation Plan (1993) described a recreational corridor, the Anaconda-Butte Heritage Trail, weaving among cultural and historical resources that together told the story of the region’s rich mining and smelting history. Since 1999, much of Silver Bow Creek has been transformed from a severely injured resource area that suffered more than a century of pollution from the copper and silver mining operations during the 19th century in Butte and Anaconda, to an ecosystem that is recovering its original character.

The cleanup of Silver Bow Creek has been ongoing as part of a Superfund remedial action coordinated by the Montana Department of Environmental Quality (DEQ) in consultation with the U.S. Environmental Protection Agency (EPA). In 2000, the Natural Resource Damage Program (NRDP) of the Montana Department of Justice and the Greenway Service District (GSD) formed a partnership with DEQ, bringing a restoration component to the project that goes beyond remediation (clean up) required under Superfund.

In a 1999 state, federal and tribal settlement, Atlantic Richfield Company agreed to pay $215 million to the State, through NRDP to resolve certain claims. From the settlement amount, $80 million plus interest was set aside for DEQ and EPA to implement the remedy for Silver Bow Creek. The GSD has secured funding in the amount of $23.5M from this remaining amount to enhance the cleanup of Silver Bow Creek and coordinate this vital work with the DEQ’s cleanup of the creek corridor. To date DEQ, NRDP, and GSD have successfully worked together to remediate and restore about70%of the Silver Bow Creek corridor. The long-term land use as a recreational corridor will assure that these efforts are protected for future generations.

There are several social, cultural and economic benefits of the Silver Bow Creek Greenway including:

• Providing much-needed space for outdoor recreation and offer accessible alternatives for those who do not live near traditional parks. It will be ideally suited for popular outdoor activities such as running, walking, biking, and fishing.

• Protecting our cultural resources by providing access to sites of historic significance in southwest Montana.

The Silver Bow Creek Greenway is a community asset with economic value─ its presence enhances the quality of life of area communities and increases the value of surrounding properties.

The two counties created the Greenway Service District (GSD) for the specific purpose of guiding further planning for the greenway and overseeing the process of its design, development, and operations. This multi-jurisdictional service district was organized under Section 7-11-1102 of the Montana Codes Annotated, and, as defined by the enabling ordinances passed by the ADL and BSB local governments, the GSD exists:

“…to provide a vehicle to place environmentally reclaimed areas within the boundaries of Anaconda-Deer Lodge and Butte-Silver Bow counties under the direction and control of a single entity that will seek the best end use for reclaimed land which is deemed to be recreational, wildlife management, open space and other uses consistent with each city-county’s comprehensive master plan, develop recreational amenities to be enjoyed by the citizens of both city-counties, and promote economic development and tourism.”

The enabling ordinances further identify the GSD as responsible for the “planning, design, construction, maintenance, and operation of the Greenway System Corridor, which includes the Streamside Tailings Operable Unit (SSTOU) of the Silver Bow Creek, Butte-Silver Bow NPL site”. While the Greenway’s focus includes the four subareas of the SSTOU, this jurisdiction can be extended to other projects or areas upon approval of both city-county governments. The ordinances allow the GSD, subject to obtaining appropriate approvals, to:

“…assume ownership of, responsibility for, and disposition of any real and personal property, and plan, develop, construct, manage, or provide services on behalf of any project associated with environmental remediation, operations and maintenance, historic preservation, or public recreation within the boundaries of ADL and BSB”.

• Secured access through fee simple purchases or easements to over 80% of the Silver Bow Creek Corridor lands.

Perhaps the largest project of it type in the United States, the Silver Bow Creek Greenway Corridor has won local, national, and international awards for environmental excellence. In 2005, the project won two awards from the National Association of Environmental Professionals, one for environmental stewardship and one for conservation excellence. Also, in 2005, the Green Organization, based in the United Kingdom, presented the DEQ with an International Green Apple Environmental Award. More recently in 2006, the construction contractor received an award from the Montana Contractors Association for Environmental Excellence in Habitat Restoration/Enhancement.